The Turkey had been roasted, carved and consumed Thursday but the main event was Friday.  Dad and I headed South for more flying fun.  A while back I read about flying a Stearman on Beechtalk.  I knew my Dad had never flown one and had always wanted to get a ride. 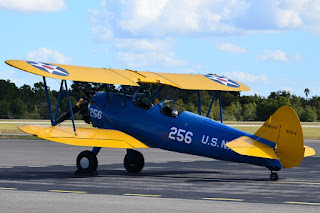 Luckily the school that taught in this classic plane was a quick one hour flight away at Winter Haven Airport (KGIF).  A few months back I made reservations to fly the plane but when the day dawned the weather was terrible low clouds and rain.  We cancelled and started looking for another day. 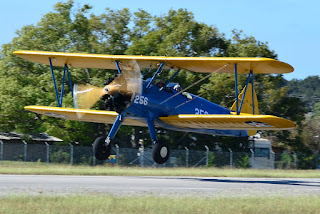 With Dad up here for the Holidays I figured we had another chance.  I booked the flights a few months back and then hoped for better weather.  Going to sleep Thursday night I figured we were sunk.  There were heavy rains and forecast was for more of the same until late afternoon. 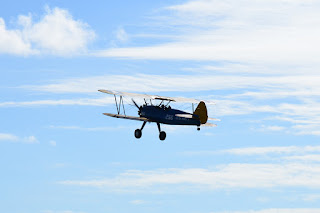 Thankfully the forecast has been terrible the last week or so.  We awoke to clearing weather and headed off to the airport.  I prepped the plane in the hangar and just as I was ready to pull out, a rain shower passed over the field.  We hung out inside for 5 minutes while it passed and waited for the sunshine to return. 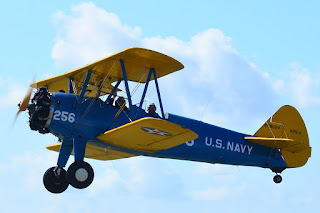 On the way down, we departed and flew our route, we got near one cloud but otherwise stayed in the bright sunshine.  Landing at Winter Haven I could see the Blue and Yellow Stearman on the ramp.  We were in the right place.  The operation is called Preston Aviation and is run by Peggy and Tim Preston.  Peggy was wonderful to work with on the scheduling and Tim was a great pilot for our rides. 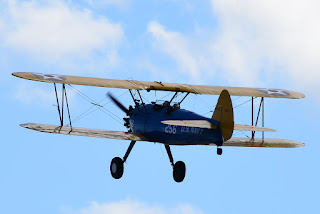 Even if you are not a pilot, you might want to head down there and enjoy their hospitality and experience flight like the early pioneers did.  The Stearman, is a biplane introduced in 1934 as a military trainer.  This particular one was made in 1945.  The plane was younger than Dad but only by a few years. 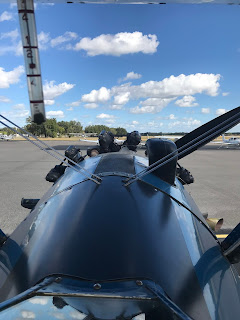 Arriving at KGIF, we headed in to meet Peggy and Tim.  We chatted a bit and then headed for the flightline.  I sent Dad first.  I figured he had been waiting 89 years, no need to make him wait longer.  Tim and Dad did the preflight while Peggy and I chatted.  Dad then hopped into the plane.  They had a step stool to get onto the wing but after that you need to grab a handhold on the wing, swing your right leg over the cockpit side and step on the seat.  Then you shift handholds and while grabbing the upper wing with both hands, swing the other leg in and slide down into the seat. 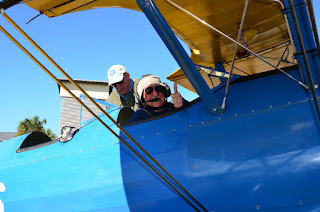 Dad was quite agile and Peggy was soon fastening his harness and getting his headsets set.  Then we backed up, Tim yelled "CLEAR" and the radial engine puffed a bit of smoke and started its low rumble.  They taxied out and Peggy had me hop onto a golf cart so we could get a good vantage point for the takeoff. 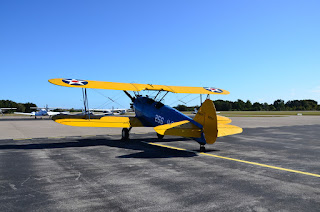 They flew for about 30 minutes and then returned.  Dad hopped out, ok, maybe slowly extricated himself is more accurate.  Now it was my turn.  I completed the needed gymnastics to enter the front cockpit and was soon briefed and belted in place.  The plane is fully instrumented with both airspeed and altimeter.    You don't need much to fly this plane.  Tim told me that some people claim they flew without airspeed.  You can sense your speed quite easily by the level of rushing air. 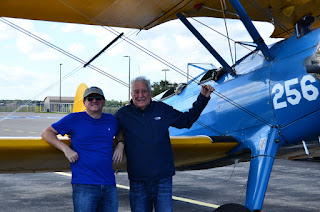 We taxied out and with the stiff breeze down the runway were off in a few hundred feet.  At 200 feet or so Time gave me the controls and I was off.  We climbed and I followed various highways as we worked out way North.  I could See Orlando in the distance and Lakeland off to my left.  It was a bit hazy, on a clear day you can see Tampa too. 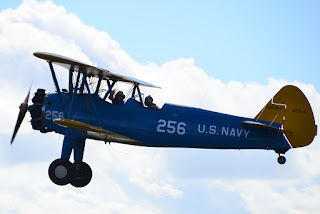 Droning along in the cool winter air with the blue skies I was glad we had waited for the good weather.  Once we had reached out cruise altitude of 2000 feet, Tim started having me get a feel for the plane.  360 turns were first, left and right.  There are only 220 ponies up front but it has a good bit of torque.  As a Bonanza pilot that is used to the rudder aileron interconnect, I had to wake up my feet and make them work the pedals.  One I started keeping the ball centered, things were much better. 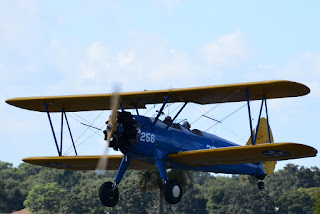 After turns it was power off stalls, they were much gentler than expected.  Then it was power on stalls, each was an easy recovery.  Then Tim had me do a power on stall but told me to keep it stalled.  It was a pussycat, the plane stalled and I kept the stick back,  A little work on the rudders kept the wings level as we mushed ahead.  Recovery only required releasing back pressure. 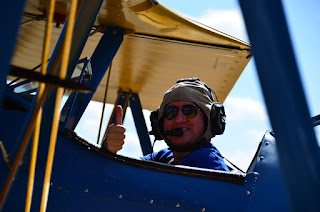 He also had me watch the ailerons as I approached a power off stall.  As you feel the controls buffet, you can actually see the fabric burbling as the airflow begins to detach.  Then it was some more sightseeing.  He took me over an elephant retirement home, it is Florida, everyone retires here.  Pretty cool to see the giant animals roaming about from 1500 feet. 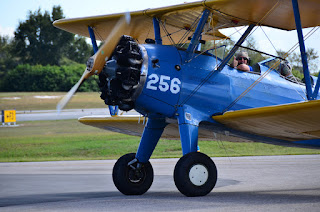 Heading back, we did one more maneuver.  When we got to I-4, we did Lazy Eights.  At first I was a bit timid but with coaching, got more aggressive on the pitch angle.  I was rewarded as the plane basically flew the maneuver itself after the first 30 degrees of turn.  The nose gracefully dropped through the apogee and settled down ready to head the other direction.  Much more fun than when I had to do it on my commercial check ride. 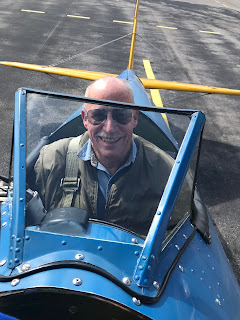 Sadly the fun was nearly over, it was time to head back.  Now in my plane I have many GPS moving maps to guide me.  In the Stearman I had not even brought a map.  It was up to me to find my way home based on where I had been.  To complicate matters, the wind was about 30 knots at altitude and pushing me West. 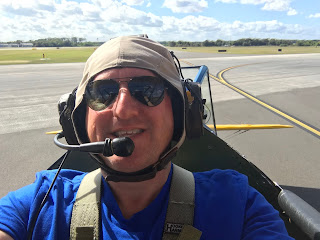 I quickly picked out the lakes around the airport and headed that way.  I did have a trusty compass and when it showed South I knew I was at least heading mostly the right way.  A short time later I oriented myself and picked out the runway among the lakes and fields.  I joined a left downwind for 11 and was going to give the controls back but Tim told me to keep going.  I brought her around and established on short final.  At about 200 feet, Tim took the controls and we gently returned to earth. 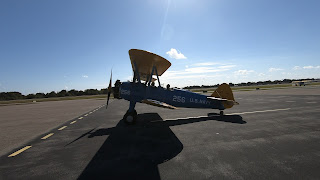 The flight home was done with modern technology.  The weather had turned a bit back at home and we had to make our way through some bouncy clouds, some light rain and shoot the instrument approach.  In the span of a few hours we experienced the full spectrum of flying from the early days to high tech.
Posted by The Husband at 5:21 PM